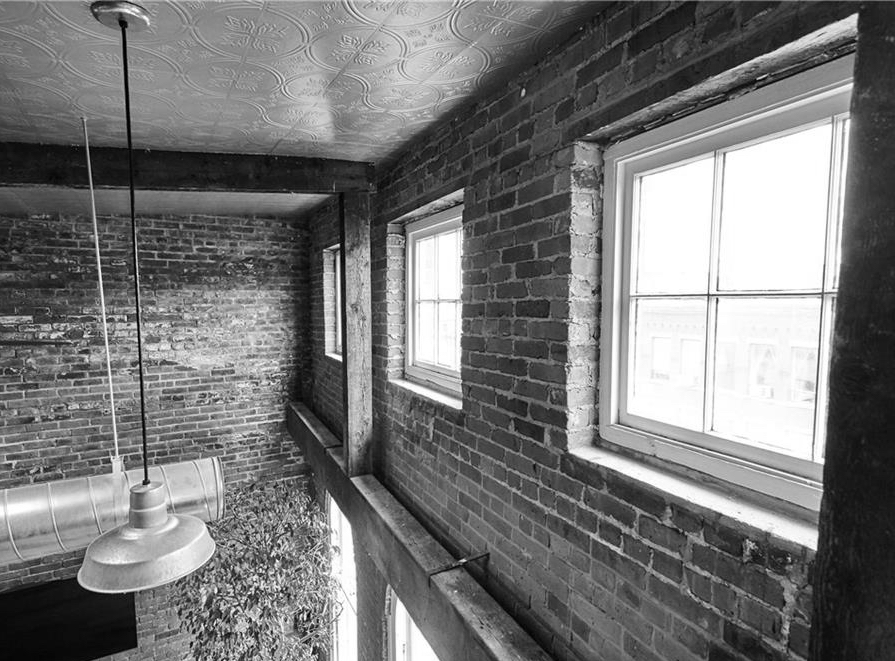 He was a wannabe Bachelor with his concrete-floored, exposed brick studio apartment. As soon as I walked in all I could smell was day old burger grease. It smelled as if he took a trip to McDonald’s the night before and forgot to switch out the trash. He asked if the smell was noticeable after lighting a half-melted candle.

Our conversation echoed and laughter shimmied up to the ceiling, bouncing off brick, chucking against concrete, on account of the pile of artwork he had yet to hang up. His apartment reminded me of a college dorm room on move-in day. He said he had moved in a week or two before but based on the red solo cups in his cupboards and travel sized soaps on the vanity, he didn’t seem like the type to plant roots.

We walked together to a nearby bar. He ogled at the expensive cars parked on the main drag like they were women; when we got to the restaurant, he requested a window seat. He kept his chair turned out and smiled at a group of women walking in and then shifted his attention to the football game on a nearby TV. I too watched the sports commentary but I couldn’t help myself from keeping an eye on him not keeping an eye on me.

The waitress on duty was slow to take our drink order. I got some vodka lemonade that tastes like room temperature sugar syrup. He ordered a sugar-free Vodka Red Bull and while his eyes ping-ponged from the other women, to the tv, to back to me, he shared his experiences trying the Keto diet.

He shared past stories of infidelity and dragged me to his pity party where he complained about his ex-wife. He made mentions of the future and poor money investments he’s willing to make. If it wasn’t for him trying to hold my hand under the table, I wouldn’t have thought this was a second date.

We had been together for over an hour at this point, and he hadn’t tried to kiss me. Sucking down the last of my vodka sugar rush, I recalled how he asked if I wanted to hang out again after our first date. We met a week before for pizza and drinks. I was dressed for a date; he was dressed for the day. He showed up with two band t-shirts from JCPenney and handed them to me as soon as we were seated. He told me he liked to do that type of stuff for people he cares about… for friends.

He left his Vodka Red Bull untouched after only a few sips. He requested the bill and checked his text messages before adding a tip. A message from a girl appeared on his phone. He had her saved as her first name plus the name of the dating site where they met. I thought it was funny that we saved contacts a similar way and yet, he’d never know that because I shut off all of my notifications before I drove to his apartment.

I quickly checked my phone and noticed the various texts awaiting my response. I wondered how he would’ve felt if he saw the messages from John, Scott, Matt and David trickle in over the past hour. I rolled my eyes as he scribbled his signature and left the tip amount empty. Another text came through on his phone. He didn’t turn off his ringer. He didn’t hide his notifications. I was certain he had made other plans once he was done with me and felt no guilt in me realizing the value of his time.

On our way out of the restaurant, he gave the women at the bar one final check out. At that moment, I wondered if there was anything I could do to him that would be equivalent to how he had decided to treat me.

The streets were quiet that night and I wanted more than anything for some musclehead to drive past us in his Dodge Charger and obnoxiously yell or whistle at me over the bubbly bass of his poor music taste. Instead an old beat up Chevy pickup sped by. There was a couple seated up front and the woman was in the driver’s seat lighting up a cigarette while slouching over the wheel. He called the man in the passenger seat a delinquent and said he’d rather die than to have a woman drive him around. I told him I had no issue with a man driving and asked if he’d be so kind to open my door. He gave me this smirk. A smirk that made the scarring on his lip flare up as if it was the hood of a threatened cobra.

He told me, matter-of-fact, with his puffed chest and pocketed hands, Well, I won’t open the door for you all the time. Not if you’re acting like a bitch.

I was surprised by his word choice and the fact he spoke in the future tense. He was so quick to make an assumption that I knew he was the type of man who despised a woman that knew what she wanted.

If that’s the case, I said back to him, then you will be opening the door for me for the rest of your life.

The worst feeling came over me: this night was only beginning.

After picking up sushi takeout from the restaurant across from his building, we made our way back to his Bachelor pad. He served the food in its styrofoam container and had nothing but water to offer me. He gave me tap water in a red solo cup. Before handing me a set of chopsticks, he took a hold of my waist and kissed me. His tongue wrestled with mine as I felt his hands wander down my backside. That was nice, he said, you’re so cute. I stepped out of his embrace and made my way to his bathroom. If it wasn’t for the sound equipment and XBox he had hooked up to his flat screen TV, I would’ve thought we were hanging out in a hotel room on account of the travel-sized soaps on his vanity. There wasn’t even hand soap. I was shocked to see a half roll of toilet paper.

When I came out of the bathroom, I found him sitting on the couch with our takeout on the table in front of him. Without saying a word, he made it pretty clear where he wanted me. He had pushed my food to the other side of the table. There was no other way around his couch; I had to walk in front of him to get to the next cushion. He had music videos playing on his flat screen TV; videos of half-naked women, busting out of their bikini tops and sucking on half-melted popsicles. The popsicle juice dripped and settled in the cleavage, sticking to skin like cum.

I complimented his high ceilings in hopes that, like the women who walked into the restaurant, I could get his attention onto something else.

Yeah, he said, looking over at his bed, too bad they are so high. I would love to get a mirror over my bed so I can look at your cute butt.

Between the red solo cups, takeout served in styrofoam and his choice in compliments, it was becoming more difficult for me to believe this man was in his forties.

I ignored the comment and started eating my dinner. Because he didn’t offer me a plate or a napkin, I had to scooch to the edge of the cushion and arch my neck forward with each bite to avoid making a mess. Once he started rubbing my back over and then under my shirt, my last concern was leaving a soy sauce stain.

It would’ve felt nicer to be touched in any other situation.

He threw on a bad Netflix movie and similar to his Vodka Red Bull, took only a few bites of his tempura. So much for the Keto diet.

After I finished eating, the movie was just background noise. But really loud background noise. Each time we kissed it echoed. It sounded like firecrackers. In between the crackling of kisses and his mumblings, I felt like I was starring in some skit. He started to narrate just about everything he did, which wasn’t much of anything. After seeing the text alerts on his phone, hearing the bitch comment and being served like I was at a college party, I knew a third date was out of the question; and once I felt his fingers wrap around my tank top strap, I gently rejected his gesture. He did not take rejection well and I could see his cobra hood flare up again. He leaned away and rolled up his sleeves.

The Fool walked me back to my car and gave me a farewell kiss. He didn’t ask me to text him when I got home safe. He didn’t even attempt to make plans for a third date. Before I even sat in my driver’s seat, he was already running back to his exposed brick interior fantasy world. At that moment I knew he had a Chantelle Match or Jennifer Bumble in-transit.

The next day The Fool texted me thanking me for the evening and requested to see me again. I didn’t respond until much later as I was focused on the planned date that evening. After having a night of watching The Fool gawk at other women and give play-by-plays during a PG-rated makeout session, I was beyond nervous for what this new guy could be like.

Ten minutes into our conversation, all anxiety was gone.

He had me laughing and smiling so much, I was starting to remember what it was like to feel happy.

We both kept our phones away and I only checked mine to see the time.

I have a dog at home waiting for me, I told him after locking my screen.

I would love to see you again, he said after requesting the check.

I would love that too, I told him.

Really? He sounded surprised. Little did he know, I knew I wanted to see him again when he served me a slice of pizza before digging in on his own.

He walked me to my car and after kissing me goodnight said Thank You.

Thinking of the night I had before, I felt so happy to have spent an evening like this with him. It took everything in me to not say, No honey, really, thank YOU!