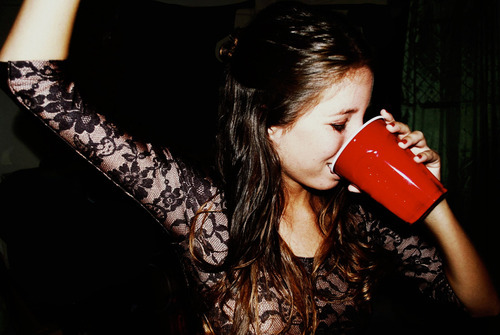 The television is playing some One Direction music video and I’m still contemplating what I taste in my cup. I tried pouring myself a cup of whiskey, but girls who reeked of bronzer and spray tan, were huddling in the kitchen waiting for someone to snap a selfie or a candid group shot. I can only imagine how great that picture would turn out. The girls would be leaning forward, solo cups in right hand, the other hand either cupping another girl’s pursed lips or tugging on a dress hem; the iPhone would catch me in the back double fisting either a bottle of peach whiskey or scotch. From the nail polish remover-like aftertaste, I’m starting to think I grabbed the scotch.

This is my second time at this house and I still can’t get over the antique furniture in the living room. There’s a turquoise hutch with doors that don’t close all the way; the hinges squeal even when you slowly pull on the bronze handles. Beside the staircase is a grandfather clock that’s stuck on the time 12:12. There’s an unfinished Cards Against Humanity game on the coffee table. Cece comes down the stairs with a red zip up over her dress.

She looks over at me and then checks the kitchen. All the girls left. “Where is everyone?”

I press my pointer finger onto my thumb.

“That’s right,” she says sitting down next to me, “you don’t smoke.” She starts picking up the dispersed game cards.

I down the rest of my scotch and reach for the remote. There’s a burn and a tickle in my throat; a tickle like I swallowed tacks. Britney Spears is now playing on the TV.

Cece grabs the remote before I can reach for it, and throws it four couch cushions away. “You know I love this song – keep it on.” She starts lip synching the words and gyrating on her cushion.

The first time I came to this house, Cece broke up with her boyfriend who lives in Arizona.

In September, we had introduction to Philosophy together. An hour before class, I overheard Cece on the phone from the other end of the hall. I caught glimpse of her pacing by the water fountain. Her thumbnail was in her mouth anytime she wasn’t speaking. We made eye contact right when she got off the phone and she ran into the bathroom. I thought about following her in there, but I didn’t even know her name.

She sat in the back of the classroom. During the whole period she was scribbling in some notebook. I didn’t think it was for class because it wasn’t labeled and the spine had lost its spiral. She was the first to leave the room when class was dismissed. I found her in the hallway with the notebook tucked under her arm. We made eye contact like we did before.

“You have class later?” Her voice was raspy like she smoked, but she didn’t smell of cigarettes.

I shook my head. “Don’t you want to know my name?”

“It’s Michaela, right? I saw you at a party over the weekend. You got some moves,” she smiled and squeezed her notebook tighter.

“Moves?” I held back a laugh and felt my cheeks blush. “I didn’t think anyone saw me.”

“Oh,” her eyes widened; they reminded me of the earth. “You were by one of the speakers bobbing your head to the beat.” She tried to imitate me by nodding her head slowly and making a hissing sound with her mouth. “I can’t beat box, but I saw your lips move too.”

I wondered why she was looking at my mouth. I recalled seeing her the night of the party, but I felt rude for not knowing her name. She was up against the opposite wall with a drink in hand. Her clique of friends went into one of the rooms because the music was too loud. In between sips, she would bob her head off-beat. We shared a smirk before I left to get a drink. She was gone before the song ended.