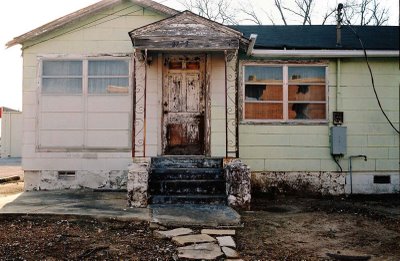 Below is a nonfiction piece I presented in my workshop class.

Nothing I have written has been exaggerated. This is a true story.

Most of the houses on Long Hall were complemented with swimming pools or porches that wrapped around the belly of the house like a belt. My house had a z-shaped roof and a basketball hoop in the driveway. The porch in the back didn’t loop to the front of the house; it just overlooked the two acres of grass and border of woods. The trees stood like guards during the day. I’d watch them at night, as they’d sway in the wind. Their leaves and loose branches reminded me of girls dancing during recess.

Within the first few months of living on Long Hall, I had befriended a couple kids. There was Kyle, who lived to the right of me, and Janelle, who lived to the left of me. Separating Kyle and I was a white fence (not a white picket fence). There were thick posts tucked underground and two separate beams that overlapped the posts, leaving a large space between the beams: enough room for either Kyle or I to sneak under. Between Janelle and I were another border of woods. My mother warned me about ticks and wild animals, so I never walked through the woods. Even when Kyle and Janelle ran through, I would walk the hall instead.

Similar to me, my mother enjoyed the trees. We had only one kitchen window, which was above the sink and faced the border of trees between Janelle’s house and mine. Whenever I’d come downstairs to eat breakfast before school, she’d be facing the window, sipping her coffee. No matter the weather or time of day, if my mother was home, she was standing near the sink, glancing up at the window.

At age four and a half, on a July afternoon, I was outside shooting hoops and my mother was inside staring out of the kitchen window. I was just about to throw the ball when I heard someone whisper, “Hey.”

I looked to my left and noticed a girl walking down my driveway. She didn’t look my age, definitely many years older. Her hair was thin, light blonde. She was wearing a pair of denim shorts and a white zip-up over her tank top. Her legs looked bony and pale; her nails were acrylic.

She asked for my name and my age. I told her. In exchange, she told me her name: Jessica. She asked if I wanted to come over. I nodded and dropped the basketball. Without telling my mother, I followed her up the driveway.

We walked past Janelle’s house, holding hands. We weren’t walking on the right side of the hall, but she was holding my hand like my preschool teacher used to, so I felt safe. Walking past Janelle’s house, I heard her dog, Spike barking from behind the house. He usually would bark at cars or people who trespassed, but the bark seemed louder. I jumped slightly at the sound. Jessica held my hand tighter. We kept walking.

Jessica led me down the driveway of the house directly next to Janelle’s. The driveway was not paved like mine. There wasn’t a basketball hoop. Instead, there was a car without wheels supported by four cinder blocks. The house did not have a z-shaped roof like mine. The roof looked caved-in. The house did not look big enough to have a second floor. The foundation seemed to slant to the right. Blankets and pieces of cardboard covered up all the windows.

We continued down the dirt driveway.

Jessica took me through a side door. Once she closed the door behind us, she let go of my hand. The room was dark. The only source of light came from one burner from a gas stove, and a small window that hadn’t been patched up all the way. I watched someone place a pot on the burner. This someone I thought was Jessica. I turned to my right, but Jessica was still there.

“Who is this?” a deep, scratchy voice asked. A man’s voice, I assumed.

“This is Dahvin. She lives down the street.” Jessica said, stepping forward.

Jessica and the man by the stove exchanged a pack of cigarettes. She pulled a cigarette out and lit it. She grabbed the pack and looked at me.

“Want one?” she asked, shaking it in front of my face like it was candy. She laughed and dumped them on the floor.

Thinking of the game “Pick-Up Sticks,” I kneeled down to the floor to gather the cigarettes. I picked up the first one and rolled it up and down my palm. I knew cigarettes were bad, but I didn’t know why.

Before contemplating putting the cigarette in my mouth, a stream of light immersed the room. Standing in the doorway was my mother. With a sweat-drenched hairline and rolled-up sleeves, she pulled me by my collar and then held me tight.

She glared at Jessica and the man at the stove before saying, “Don’t speak to my daughter ever again,” and then kicked the door closed.

On the walk back home, my mother and I did not talk about what happened inside the house. I never told Kyle or Janelle. My mother never told my father where she found me or that I was lost to begin with. Growing up on Long Hall, I recalled that one-level house as one to never visit again. As the years went on, the windows continued to stay covered and the car in the driveway never got a new pair of wheels.

As an adult, I think back to that day and wonder what made me think it was okay to follow this girl I had just met to her house. I also wonder if there was more to the house than the one room I saw.

And on top of that, if I saw the rest of the house, what would have happened?