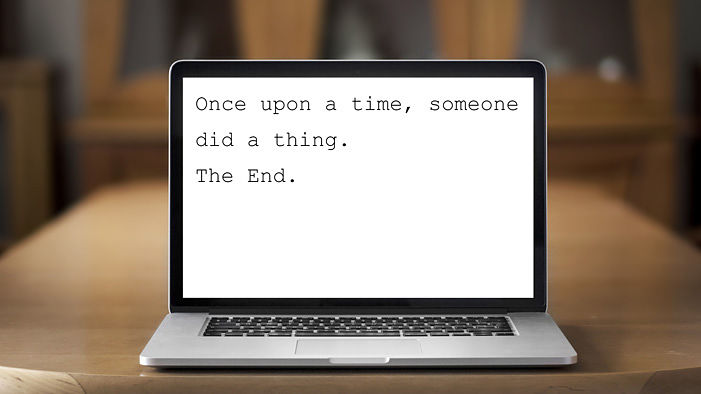 If you spent most of your high school and college career taking creative writing or English courses, you heard the same bits of advice year after year.

If you don’t struggle writing what you know, the next task is to define your theme. Once you figure out the story theme, you need to map out the chain of events and make sure there’s a clear beginning, middle, and end that is packed full of well-developed characters, engaging scenes and of course an arc.

Alright, awesome, sounds great. Where do I get started?

If you were anything like me, you found yourself sitting in front of an open word document, blinking in unison with the cursor, listening to a motivational playlist (Britney Spears was my preference), hoping to God your typing fingers could decode the ideas rolling in your brain like a bunch of bingo balls.

The truth is, the inspiration never came when I wanted it to. If I was ever in a rush and completed an assignment just so that it wasn’t marked as late, it would not be my best work. My best ideas literally appeared out of thin air. They would visit my dreams. They would divert my attention to the hall during class. They would sneak up on me out of the blue all like, “hey dumbass! Why not try this on for size?” In response I’d roll my eyes, “Wow! Why didn’t I think of that even though my brain literally just thought of that?” and proceed to jot it down in a notebook for safekeeping.

Ok awesome. Step One is pretty much finished, but now I must define a theme. Hmmm…it’s pretty much impossible to pick a theme that hasn’t been used for hundreds of years. Just because you have an idea, it does not necessarily mean you know what kind of story you’re going to tell. If you’re able to outline a whole story based off an idea that popped in your head one night, and follow the outline all the way through – kudos to you!

To be completely honest, outlines freak me out. Once I get engrossed in a fiction piece, I have a clear idea of how the story will end and the big climatic scenes, but what leads up to that, I have no fucking clue. Even though I have created the scenes, I let the characters lead the way. If I am past twenty pages in a story and there has not been an obvious shift in the characters, I’ll go back and see where there was a missed opportunity; but currently I am a hundred pages into a project I am working on and I’m just like, “What the fuck is going on Eric?”

When I was still taking creative writing courses, I always struggled with knowing when something in a scene was considered important. I recall turning in a working piece to one of my professors and he was so confused why I spent a paragraph talking about the wallpaper and the curtains, when the real action was happening outside the house. I simply shrugged. He wanted details, so I guess I went a little over board. On top of having an underlying theme, there’s these other things called motifs. Motifs are reoccurring elements that have symbolic significance in the story. The wallpaper and curtains could have worked as a motif if big scenes were happening that particular room, or the red curtains were given as a gift or the story ended with someone choking themselves with the curtains. That escalated quickly I know; my bad for picking such a weird example.

I’ve never felt that there are clear motifs in my writing. I’ve always considered what I put in my stories as Dahv TradeMarks. I believe a lot of writers contribute their own quirky trademarks into their pieces, how could they not? Let’s look at Quentin Tarantino for example. If you watch a handful of his films you’ll see a number of similar elements: close-up on feet, close-up on lips, trunk and hood POV shot, the God’s Eye POV, the use of black and white, and the list goes on…

As for Dahv TradeMarks, here are just a few:

Redheads: I use a redheaded female character as a device, similar to how Lewis Carroll uses the white rabbit in Alice in Wonderland. This is the type of character who teaches the protagonist a lot about him/herself while maintaining an emotional & physical distance. She’s a mentor and a friend, but nothing more. How the protagonist perceives her is really up to his/her intentions.

Cigarettes: I don’t smoke so I don’t really know why but I always put smokers in my pieces. I’ve always had an oral fixation and that’s why I used to bite my nails and to this day, always have a pack of gum on me. That could be it… I also have a vivid memory of one of my baby sitters smoking with her friends in my driveway while I played with my tricycle.

Body Piercings: I’m lame and just have my ears pierced, and maybe that’s why I like to give certain characters piercings and tattoos. I’m a sucker for living vicariously through my characters.

References to Music: This is something I would categorize as a motif. In the story I am currently working on, the Santana song “Smooth” is referenced a number of times. It’s a common ground for a handful of the lead characters. Similar to the redheaded “white rabbit,” it keeps the protagonist on his toes whenever he hears it.

So, I have my idea, a theme, some characters and a few quirks… what now? Exactly. What the fuck now? That’s the thing about writing, you are constantly battling with feeling in control and also out of control. It’s kind of like life, isn’t it? One month everything is planned and smooth sailing, and the next you hit a bump in the road and you’re back to the drawing board. I think the best thing about writing is bringing a story to life. The whole process teaches you something about yourself and you will eventually see the world through your characters eyes – that’s when you know you’re working on something magical.

I do have to say there’s a part of this process that beats all the rest – it even beats finishing the book – and that’s getting started.