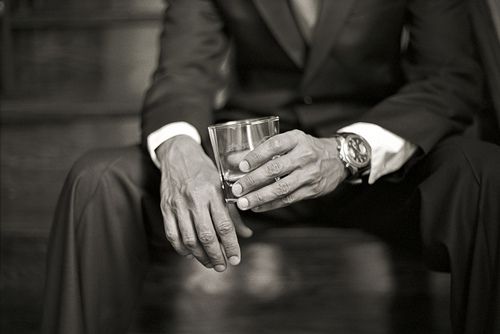 Every man in the restaurant eye fucked Scarlett as soon as we approached the hostess’ podium. In unison each man sitting at a table with his wife, took a sip of his whiskey, glanced over at Scarlett and tightened his jaw before swallowing. It was a piece of choreography every married man, who was sick of his nagging wife, learned when she was off getting manicures with her best friend. They gawked. A few choked on their liquor, others whispered aggressively to their wives something to the effect of, “hush sweetheart, I’m not looking.”

I didn’t mind the other men looking at her. She looked gorgeous and if I was one of them, I’d probably end up dropping my drink or jaw like a classic cartoon character.

Some mornings, as a kid, I would fake being sick as an excuse to watch episodes of Johnny Bravo. I would borrow my mom’s sunglasses and practice my strut and “hey baby” voice in the mirror. I idolized Johnny and would do push-ups every night to try to get his sized pecs. After all those push-ups, I’m still scrawny as fuck and don’t have the guts to call a woman baby.

Scarlett turned back and smiled at me when the hostess grabbed our menus. “I hope you’re hungry. I recommend everything here.”

Scarlett ordered a bottle of wine for the table and poured herself a glass. I got a whiff that reminded me of raspberry vinaigrette. I had never drunk wine before. All I knew was what my dad told me, “If you’re ordering a steak, drink red. If you’re ordering fish, drink white.” My dad never liked the taste of steak though, and always ordered his burgers well done.

A man, who had a full beard and dressed in a white suit, greeted Scarlett with a smile and kiss upon her hand. His name was Anthony. He was one of the owners. They exchanged a few words about the restaurant business and the car business. I sipped my wine anytime Anthony glanced over at me. I didn’t have much to contribute to the conversation. I worked at a diner that served green beans out of the can. Anthony co-owns a restaurant with valet parking and live music. Everyone here looked like the kind of person who subscribed to Fortune magazine just because they were mentioned in an article.

“How’s the new dealership coming along?” Anthony had a deep raspy voice. It sounded like he had done a lot of yelling throughout his life. “Joe came here the other night. Sounds like you picked a good location.”

Scarlett laughed and Anthony joined her. A man, who was dining with his wife, chuckled to himself before sipping his scotch and tightening his jaw. His wife turned back to look at us and rolled her eyes. “We are currently in the recruiting process.” Scarlett winked at me and the wine hit me. “But I’m looking at real estate for myself first.”

After Anthony left, the waiter returned to take our order. Scarlett ordered for me: a burger with truffle fries.

“What’s the difference between truffle fries and regular fries?”

“Besides the price and the taste?” She ordered herself a fish special that, according to the waiter, came with purple potatoes. I never felt like I lived in such a plain world until I went out with Scarlett.

“Tell me about yourself, Eric,” she said pouring herself another glass. “Besides your job and your car, I don’t know too much about you.”

I suddenly had a memory of my sister lighting up in my bedroom. The sound of her struggling with the lighter ticked in my ear. “I don’t know where to start honestly.” The ticking grew louder and I feared Scarlett could hear it. “Do you mind if I go to the bathroom real quick?”

“Not at all, Eric. I’m thinking of ordering another bottle anyway if that’s fine with you.” She called over one of the waiters who had the wine list. The ticking in my ear stopped and was replaced with this nonstop pounding in my chest. I tightened my jaw and pretended to swallow some whiskey that I’ll never be able to afford. “Eric,” Scarlett said after ordering another bottle. “I would never take you somewhere you’ve never been and expect you to pay.”

The bathroom smelled like lavender mixed with lemon and everything besides the mirror was whiter than Anthony’s suit. There were two men at the urinals who stopped talking as soon as I walked in. I resorted to one of the stalls. The seat was so clean it looked like it had never been used. I was sweating through my shirt, my hands were clammy, and my mouth tasted like I had been chewing on beef jerky for the last hour. The urinals flushed. Before the bathroom door closed I heard one of them say, “He can’t know who she is looking like that!”

I felt sick. I wanted to leave. I wanted to take the keys from the valet and drive back to Scarlett’s. Scarlett knows where I work, and still took me out with her huge diamond, strapless dress and credit cards filled to the brim with Mercedes money. Scarlett thinks she knows what I drive, and still invited me to her house with the four car garage, Martha Stewart’s dream kitchen and panty-dropping bartender skills.

Since I got to the restaurant, Kelly had called and texted me another four times.

I don’t know what came over me earlier when Luke was here, but what I said wasn’t okay. I’m still going to be here this weekend and I do want to hang out with you Friday. I was thinking we could check out that new Mexican place…please text me when you’re on your way back

Kelly doesn’t know who Scarlett is, but she was blowing up my phone like she did. Kelly knows where I work, what I drive and where I live. This was the first time she asked me to text her when I was on my way home. She probably assumed I wasn’t coming back.

I was at the sink washing my hands when Scarlett texted me.

I don’t have all night Chevy Boy, but I don’t mind waiting for you

Seems like Kelly and Scarlett were on the same page.