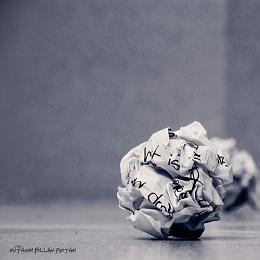 When you have writer’s block it comes in waves. It’s not an actual wave per say, but more of a sailboat or raft freckled with tape (depending on how desperate you are) trying its best to navigate to shore. The sailboat isn’t impressive. You can see it teetering on the water not aware of the three waves heading towards it. Yes three. One is approaching from behind and the other two are rolling towards the boat’s sides. Together they crash like some lopsided trinity and the boat loses its sail, a couple pieces of driftwood and the wheel that you just realize was originally a control valve and now you’re realizing where all this water is coming from. The remaining pieces of driftwood tilt and overlap one another, resembling a Cross (but of course).

You try to remember the last time you went to church or sat in a confession booth. You recall a girl named Sue from Sunday school that would beg you to stay an hour after Bible study. The priest was in his office and couldn’t hear you kick at the back of the pews as Sue lured your hand to the top of her triangle.

Triangle? Yes, here you go again. Now you’re wondering where Sue is – did she go to college, did she meet someone else after you refused to go back to Sunday school? You told your mother you were questioning your faith at age twelve and she tapped her carton of cigarettes and threatened your ass was next.

Look at all this material. You’re certain you could write something now. But let’s be honest – who really wants to hear about the time you lost your virginity to Joey Parks who had a visible circumcision scar half an inch beneath the head of his penis? Joey was a lead guitarist of a band called Worn-Out Jeans even though he wore sweatpants anytime it was below 65.

You two broke up in May hours before Worn-Out Jeans played live at some coffee bar that had ceiling lights that hung down like testicles. You stayed for his show and ordered yourself a cup of decaf coffee and watched his left hand slide up and down his guitar’s neck, and his right hand patter the whammy bar in between strums. It was then you realized he couldn’t love your body the same way he loved his guitar. When disposing your coffee cup, you catch the barista looking over at you. She has a nametag pinned over her right breast. You squint trying to make out her name, but your glance gradually moves up synchronizing with her lips lifting to a smirk. She deposits a strand of hair behind her ear and you notice the tattoo on her forearm: a tree sprouting from her wrist. The branches that spiral up her bicep look like surfaced veins. You hear Worn-Out Jean’s song filter down to its final drum solo; you watch Joey turn his back to the audience as he teases his guitar’s reverb and you head for the doors.

You’re lying in bed and an oak tree’s shadow is accenting your ceiling. You fall asleep thinking about the barista. Your subconscious must wonder if she represents nature because you discover a flock of birds on the back of her neck and a patch of purple mums beneath her belly button. Her fingers are pruned and nails are colored turquoise. She’s lying down next to you on her side with her legs pressed together. This makes you wonder if she’s a mermaid.

You wake up thinking about the barista and your bed sheets feel like they hitched a ride on your poor excuse for a sailboat (or did you prefer the raft?). The branches have been replaced by sunlight.

You’re okay that it’s morning. It’s a Saturday morning and the sun is pulsing in the sky. It’s the quietest heartbeat that still represents life.

You’re walking through your suburb and watch neighbors open up garage doors and mailbox mouths. No one exchanges a “hello” or hand wave so you keep walking and step on the sidewalk cracks because you know your mother won’t feel the difference.