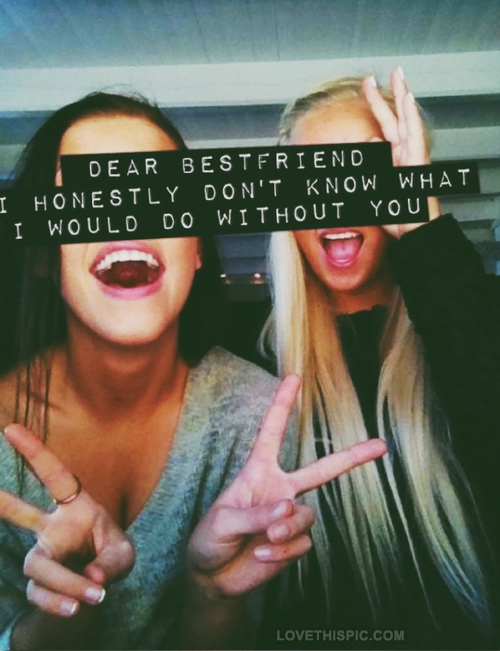 Last semester I was taking a literature course on Shakespeare. Although I had read a good handful of Shakespeare’s plays in high school, I didn’t appreciate them until I took this class. Shakespeare is amazing at portraying love, friendship and betrayal in all different types of themes. Whether it’s magical like A Midsummer Night’s Dream or controversial like Macbeth, all his works attempt to share the same messages (bluntly):

What makes a good friend?

How do you know someone is fucking with you?

During one heated discussion about friendship in the class, my professor asked if any of us had had a friend for more than three years, seven years and ten years. I raised my hand for all three.

He looked at me from across the room and asked, “Doesn’t that make you feel ridiculous?”

I dislike the label “best” friend. It’s not because I am envious of those who have had “best” friends all their life (I have two), but because the label is recyclable. I’ve lost count how many times I’ve met someone new – we hit it off right away – and a month later I am their “best” friend. Of course at this point, I am so flattered to be considered that important to them, I fall into the whole “best” friend routine: hanging out/talking all the time, sharing secrets, developing inside jokes, etc. At the beginning of these new and exciting relationships, I always know it will end badly.

How could it not?

For those who are reading this, maybe you have been sucked into the “best” friend routine. A few months or years down the road, something will click – it always does. This new friend, who, probably, from the beginning didn’t treat you respectfully, might do something that will push your limit. At this point you’ll start to wonder what was it about this person that attracted you or kept you around for so long. You’ll start to re-evaluate all your other friendships/relationships that have lasted for many years and attempt to figure out why those have been successful.

Here are a number of reasons why those friendships have worked and your newest one is failing:

Because I have personally experienced these temporary toxic friendships, I do not initiate the “best” friend labeling. If we meet and hit it off and within that 30-day free trail you think I am your “best” friend, I will not talk you out of it. The first couple years of college I really wanted that huge group of friends that is perfectly depicted in every television show, that I fell into many “best” friend traps. It’s really awesome to think that you are “popular” or “cool,” when in all reality, managing all of those relationships is time consuming and more hurtful than satisfying.