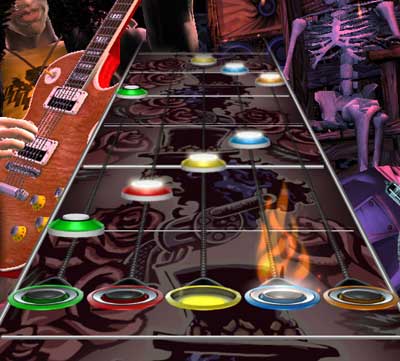 Last night I drove to York Beach with my boyfriend and played a few games at the rundown arcade, Fun-O-Rama.

After adding more money to the meter I told him, “I want to play Guitar Hero,” as I pulled out four quarters.

“Isn’t it funny how we have this game at home, but you’re going to pay to play anyway?” He asked.

I shrugged and reached for the game controller.

Halfway through my selected song, I thought to myself, “What will my children think of me?”

Really though! TRY explaining Guitar Hero to someone who has never played it or seen it – this could be someone older or younger than you.

How ridiculous is it?

Fifteen or so years from now, I’ll have a child, maybe even a teenager and they’ll be asking me and my husband what we did for fun. It’s a normal question! I’ve asked my parents about their childhoods.

I can see myself sitting at the kitchen table with my children, trying to explain Guitar Hero:

Me: Oh honey, it was this popular video game your father and I used to play as kids.

Son: How do you play?

Me: You simply play famous rock n’ roll songs while following a color pattern that appears on the screen.

Me: Yes! The game controller was shaped like a miniature guitar and it came with five buttons: green, red, yellow, blue and orange. In the center pad was a horizontal piece that you would push down as a way to strum.

Son: So, were you actually playing?

Daughter: Can you play those songs on a real guitar?

Son: Were you good at Guitar Hero?

Me: Not as good as your father! He could do a couple songs on expert level.

Me: You would use ALL the colors!

As accurate as this strip of dialogue may be, I can’t even imagine what type of technology our kids will have access to.

For me, there was this consistent ego boost that came with completing a song on Guitar Hero; there’s something about that video crowd and super stardom mode that kept me addicted.

The game is fixated on giving the player the opportunity to rock at something they can’t do overnight. It’s silly really; but all in all, it’s no different than where we are now with Facebook. For example, the number of friends someone has online is not necessarily realistic. I’m sorry, but no one has over 1,000 friends that they know well and talk to on a regular basis! I have over a thousand friends on Facebook and maybe I talk to twenty on a regular basis. Okay?

If you never got excited over a high score on Guitar Hero or the number of likes you received on a picture, you are lying to yourself!