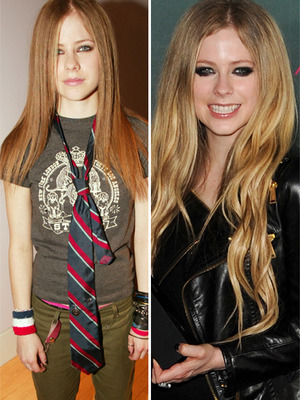 The past month at my internship, I was assigned the task to pick a brand that I believe needs to be repositioned; a brand that needs a change of tune because maybe its target audience isn’t being attracted correctly or its falling behind with its competitors.

Passionate about music, I took on the challenge of repositioning Avril Lavigne.

Does this ring any bells?

If you searched for Avril now her most recent music video for her song Hello Kitty, which is a tribute to her Japanese fan base but is looked upon as being racist in the states, would be at the top of the search engine.

What is Hello Kitty you may ask?

It’s Avril’s take on K-Pop and Dubstep. Yes, Avril tried to do K-Pop and failed miserably.

Yes, I’m talking about Avril: the rocker who debuted in 2002 wearing baggy clothes and a necktie.

Well, all in all, it’s extremely heart breaking for me. When I was in fourth grade, I fell in love with Avril’s tough and independent style. She was different from Britney Spears; she was labeled as the Anti-Britney for years! Don’t get me wrong, I absolutely loved Britney Spears (and still do), but growing up wanting to perform and play guitar myself, Avril Lavigne was my number one role model.

I was a huge fan of her first two albums: Let Go & Under My Skin. When she repositioned herself back in 2006, with blonde hair, more upbeat songs and annoying lyrics such as, “Hey, hey, you, you, I don’t like your girlfriend,” I predicted her slow descent. I remember my mom telling me, “She’s still the same! Look, she’s playing a guitar in the music video!” Although this is true, she also had backup dancers in the video; she wore tight-fitted clothes and high heels: the exact opposite of how she presented herself merely four years beforehand. This was not Avril. This was the Anti-Britney following the pop princess’ footsteps a few years too late.

Could I have predicted Avril making a song like Hello Kitty? Hell no. I doubt she could have. But here we are.

With this being said, I had to take on the task of drafting out what would be best for her when it comes to being popular in the states. Currently, she has disgusted almost everyone: past fans, current fans and of course haters. Billboard magazine claimed Hello Kitty was “an embarrassment in every language.”

Why’d you have to make things so complicated, Avril?

She’s not being fair to herself. After her third album released, she switched from style to style and never stayed consistent. Back in the day when I listened to her first two albums, I loved them because they were mature and the material grew UP with her audience. She has been gradually growing AWAY from her target audience for the past eight years. How can she compete with artists like Miley Cyrus, Taylor Swift, Lady Gaga and STILL Britney Spears, if she’s shooing away her fan base as a means to have fun?

She needs a producer who will listen to her ideas and have her best interest. The producers she is working with now are delivering “all over the place” albums as Billboard put it. Her newest album Avril Lavigne, has songs like Hello Kitty but also songs like Let Me Go, which is more of a ballad.

She needs a label for her brand.

Miley Cyrus went from Disney sweetheart to Rebel. She grew UP with her audience.

Taylor Swift has always been the “girl next door.” She’s come out with songs like 22. Obviously she’s growing UP.

Britney Spears was and always will be (until she retires) the pop princess. How she is marketed is based off of a brand package created in the 90’s. Does it still work? Fuck yes! Why? Because she delivers the same type of material and dances her fucking ass off and people love it (I LOVE IT).