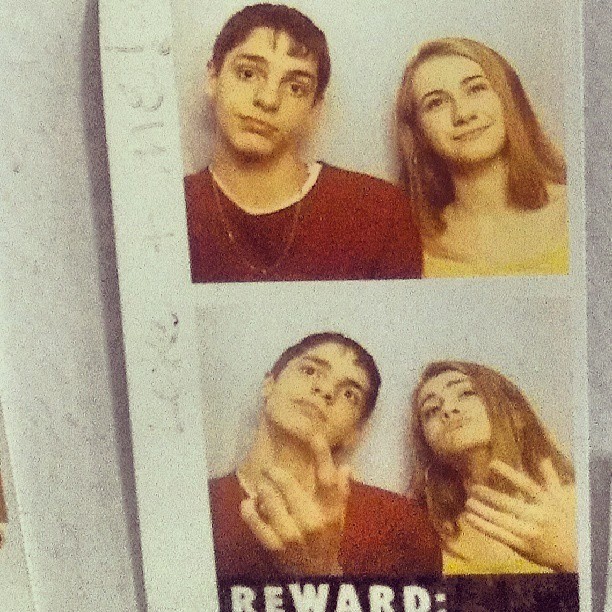 In celebration of my boyfriend’s 21st birthday, I am sharing this non fiction piece I wrote about him last year. This piece recalls when we first met to the very beginning of our relationship.

I couldn’t see his eyes. He stood in front of me, wearing a hoodie with a broken zipper, white sneakers with ripped tongues, and denim jeans splattered with, what looked like, white paint. Looking at his sweatshirt, I wondered if he knew his zipper didn’t work. He smelled like a stalk of celery that had been dipped into an ashtray. I imagined him having sleeve tattoos on each arm or a pack of cigarettes in his sweatshirt. I refused to offer my hand once he removed his from his pockets. His palms were scarred and callused, but empty. He rolled up his sleeves and only a tan marked his forearm. He pushed his hair to the side, looked at me and instead of introducing himself, said, “I’m your number one fan.”

Our mutual friend, Emma introduced him as Luke. A couple days after meeting me, he sent me a friend request on MySpace. A few days later, Emma gave me his AOL instant messenger username. Not too soon after that, I sent him a message. From that moment on, every night Luke and I would chat.

Every Saturday, Emma and I would hang out at the mall. One day Luke approached us at the food court and asked if he could join us. Emma greeted him with a hug and said of course. I couldn’t stand the fact that he invited himself. Although Emma and I religiously saw each other, I found him slithering into our plans as rude.

That day he was wearing the same jeans as the day I met him. I asked about the white stains and before he could mumble behind his long set of bangs, Emma said, “Oh, you know, Dahv.” She then elbowed him in the side, “I guess Leah did a good job.”

Being fourteen at the time, I understood the context of the joke but did not understand how invalid Emma’s joke was. For the rest of the time at the mall, I kept to myself. I would occasionally glance at his face – the little I could see of it – and could not believe that someone like him had a girlfriend. I would then look at his jeans that struggled to stay on his waist as his torn up sneakers stepped on the cuffs, and couldn’t imagine some girl putting her face anywhere near his crotch. As we looped around the mall I could smell his body odor and rolled my eyes. I applied deodorant and two different types of perfume before seeing Emma. He reeked of cigarettes and didn’t even smoke.

Before my mom came to pick me up, the three of us sat down at a table in the food court. Emma and Luke sat across from me. Luke grabbed Emma’s phone from the table; he took out his and started to press buttons – his eyes darted from her screen back to his. Suddenly I felt my phone vibrate from my back pocket. The number on my screen was unknown. I hit ignore. Phone now on the table, it started to vibrate again. The same number came up.

“Who is this?” I asked and then started reading aloud the number.

“Nate?” I wondered why she would give her brother, who was already in a committed relationship and three years older than me, my number. I finally answered the call. There was more than one voice on the other line. Bringing the phone closer to my ear, I could hear Emma and the sound of the family sitting behind her. I looked at Luke. He hit the end button on his phone and the sound from my phone stopped. I laughed.

“Wow, you have the coolest laugh. I kind of want your voice box.” He said, pushing his bangs out of the way.

I laughed harder. “You could have just asked for my number, silly.”

Emma and Luke walked me to the entrance of the mall, where my mom was idling in her car. I gave Emma a hug and made plans to see her again. When I lowered my arms, Luke opened up his and walked towards me. Without him asking and without me confirming, we hugged. Nose to his chest, the scent of cigarettes and celery was stronger, but I squeezed him tighter. After my mom and I had left the parking lot, my phone started vibrating again. It was Luke. All he said was, “Hey,” and after a long pause, “I’ll talk to you soon.”

Eventually, anytime Emma and I hung out Luke would come along. Besides talking over instant messenger, Luke and I started texting and would send each other occasional emails. At the end of May on a Saturday, the three of us were at the mall like usual. An hour went by and Emma said she didn’t feel well. Twenty minutes later, her mom came to pick her up. I was about to call my mom too, but instead I texted her to let her know Luke and I were hanging out alone. It was starting to get warmer out so he was no longer wearing the sweatshirt with a busted zipper. His pair of jeans was still baggy around his thighs and dragged on the floor, but there were no stains. He had on two t-shirts: a red shirt and a white undershirt. He didn’t smell of Axe or Old Spice, but I couldn’t care less because his hair was cut. I could finally see his eyes. They were brown and grew bigger anytime he laughed or smiled. His smile was huge. The front two teeth were gapped. Some of the teeth on the bottom row were jammed together like a car crash. His lips were full though, and complemented his teeth.

As the day continued, we walked through Sears and came across some jerseys for the Celtics. On the back of the green jersey read: Boston.

“Your last name is Boston?”

“Yup. Lucas George Boston,” he brought his hands up to his head, bent at the elbows and flexed.

I checked out his bicep and followed the small indentation of a tricep to his armpit. At that moment, I wanted to see him shirtless.

Eventually it was summer and we started to hang out every weekend together. For my fifteenth birthday that year, he gave me a song he wrote himself. At the end of the song he said he loved me, but I didn’t think much of it. I was still caught up about whom this Leah girl was that made him make a mess of his pants. When I left for boarding school that September, the fear that crushing on Luke was a waste of time, quickly faded. At the end of the month he sent me lyrics he wrote, asking for feedback. After reading the first two lines of the song, I knew this was not something he wrote for fun. This song had a purpose. A week later, he sent me the completed song. He was rapping to the instrumental version of Mariah Carey’s song “Lovin’ You Long Time.” Hearing the opening line, “I’m talking about a girl who I’ll probably never have, so much any hurtin’ and you’d know this if you heard her laugh,” I knew that Leah, like his paint-splattered pants, was left in the past.

On the first Saturday of November, we met at the mall. His friend Aj came along, but Luke didn’t mind holding my hand in public. Every few minutes I’d let go to rub my hand down my pant leg. I couldn’t stop sweating; I hoped he was sweating too. Luke’s hair was cut. It was shorter than the day in May. He had a bit of stubble on his chin. I imagined him having a goatee and smiled as I said, “I like the facial hair on you.” An hour before my mom came to pick me up, Luke and I were standing outside of the mall bathroom waiting for Aj. We started to exchange inside jokes and share a few laughs. At the end of a laugh I sighed and said, “Oh, Luke,” before leaning over and kissing him on the cheek. He smiled, without showing teeth, and leaned in to kiss me on the lips. He was my first kiss. We both smiled afterwards and Aj came out of the bathroom to find us hugging; hugging similar to the way our friendship started.

Two weeks later, Luke asked if I wanted to be his girlfriend while we were sitting on a mall bench. I said yes. He leaned over and gave me such a big hug; I almost fell over. His hair was short and a goatee had grown-in.

One night before January, I was talking to Luke on the phone. It was a Friday night and we had made plans to hang out at my house the next day. I was about to get off the phone when he said, “Hey, I have something to tell you.”

I rolled on my side, staring out my bedroom window. “Yeah, Luke?”

There was a long pause before he said, “I love you, man.”