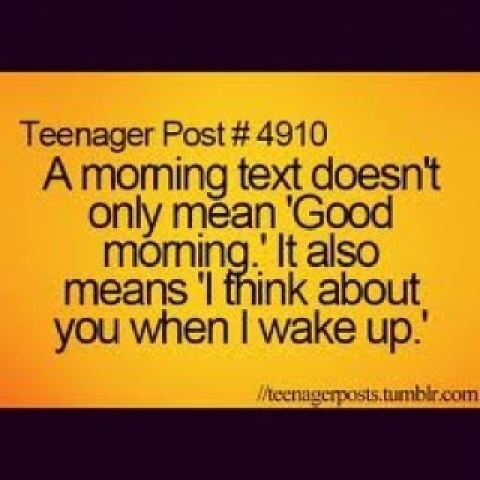 A constantly shared image on Facebook and Pinterest I keep coming across is about morning texts. Anyone who is searching for that special someone takes every aspect of communication seriously, especially the time frame.

Just because someone is texting you around eight or nine o’ clock in the morning, doesn’t mean they think of you like that. Now, maybe I’m saying this because I tend to message people the moment I remember what I need to say; this could take place in the morning, afternoon or early evening. For me personally, the specific day someone texts me has more precedent than the time; but this also depends on the text’s content.

For example, if it’s a Friday night, I am more than likely busy. Either I have plans with friends or I am out with my boyfriend. If you text me on a Friday night somewhere between five and eleven pm; things feel a bit awkward. If you text me something along the lines of “What’s up?” or “Wanna hang out?” I probably won’t answer. Don’t worry; I will eventually get back to you, but not right away. This again, is completely out of context. If you’re a really good friend of mine and earlier in the week you confronted me with a problem and you text me a, “I just really need to talk to you,” and I’m halfway through dinner, I’ll definitely get back to you. It all has to do with setting boundaries. I want you to know that I’m there for you, but I don’t want you to think you can barge in whenever it’s convenient for you.

Now, back to where I was.

Yes, okay: you receive a morning text and assume this person woke up and instantly thought of you. Oh wow, how exciting.

But, it’s the morning. You don’t know who they spent the night with. They could be a total player – you don’t know. This guy/girl could have snuck out of their lover’s apartment, came across your number and felt ambitious. “Good morning” doesn’t translate to “I love you.”

But receiving the text “I… Love… You…” at midnight does. I’m not trying to be cheesy. I am going off of experience. Two months before my boyfriend and I became official, he sent me that exact text. But once again, it’s all about the relationship’s context.

Who is this person? How often have you spoken or hung out?

Analyze how they treat you in person before you evaluate their texts.

When it’s late at night, whether or not they are in the middle of plans, they took a few moments to think of you. They could have been with friends or a date, but they make themselves vulnerable sending you a text past midnight. Think of it like this: they stayed up thinking of you.

But it can still get creepy! I’ve received the weirdest late night texts and none of them from my boyfriend. I’ve received a text at 3am from someone who woke up on account of a dream they had about me. Technically, I woke up to this text.

I think there is something more psychologically fucked up about late night texts. Whether it’s a random “What’s up?” or five paragraph-long message, this person is sending the text knowing that there’s a chance you’ll wake up to it.

I’d keep a closer eye on your text messages’ time stamps if I were you.