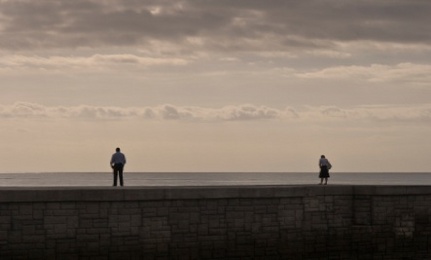 Friendships are established, usually, when two people share something in common – whether that’s liking the same band or being in the same class. How long a friendship lasts is unpredictable. It could be years, months, a few days, anything. But I can tell you right now that no friendship ends because the two people “grow apart.”

To me, that’s bull shit.

You could have just ended one because you realized she’s a bitch.

Listen, I’ve been in the same relationship for almost five years now. Although we have so many things in common, there are a lot of elements that set us apart:

He went to public school.

I went to a private art school.

After graduation, he got a full time job.

After I graduated, I went to a university.

Our relationship has always been long distant – during the school year – since day one.

If you have a strong relationship, whether that’s a platonic or intimate, the difference in age or hobbies does not matter. What matters is how you treat each other.

Most relationships end the same way they began. For example, you fall in love with some guy because he makes a good living and can get you whatever you want. Years later, you break up because he’s never around.

If you ever confront someone about a falling out they had and they answer with: “Oh, we grew apart,” they are lying to you.

Someone probably got too stuck-up and rubbed the other one the wrong way. A few cases of lying and cheating might have occurred. Or maybe, the friend was just a bitch. Who knows?

When it comes to maintaining a friendship, it’s really fuckin’ easy. Because there’s this thing called Facebook! Haven’t seen someone in a while and want to hang out? Send them a message. Or better yet, call them!

The last thing you should do when talking to someone you haven’t seen in a while is make empty promises.

Don’t say “I want to see you again,” unless you mean it.

Don’t use phrases like “I miss you,” or “I love you.” Especially to someone you have not seen or even spoken to for well over a year. It’s unnecessary. You haven’t spoken to this person in a year! You haven’t even made an effort. You don’t love them. Stop that. You’re giving them the wrong impression. They want a friend, not someone who pops in once a while when it’s convenient for them.

No one grows apart.

One person hates the way they’re being treated, so they grow up and move on.