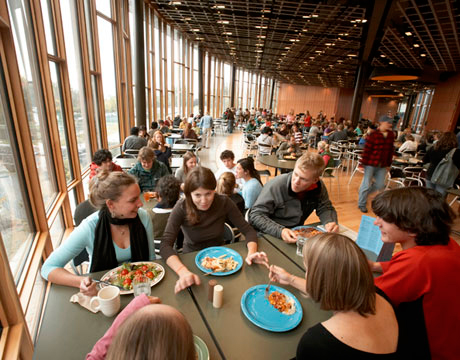 Some students hated high school because of the teachers, the rules, or the workload. I hated high school for the cliques. Groups of friends would clump like dust bunnies in the corner, while the loners would stagger the hallway like chess pieces.

Classrooms were worse, smaller than hallways. From the doorway, you could pick out the stereotypes; from the hallway, you could predict who was already in the room by their lingering cologne or cigarette cough.

The linoleum-tiled floors in the cafeteria organized the cliques like a grid. To the left were the athletes, cheerleaders and party animals (same thing); to the right were the artistic students mixed with the lesbians, gays, and bisexuals. In the center of the grid were the popular kids, yet they did not share the same standards of an average popular kid. These students usually transferred to your school for their senior year; they had never done a sport in their entire high school career yet, still managed to stay thin with out working out; they claimed to have no religious outlook on life but still wore a cross around their neck; during the whole school year, they would not have a boyfriend or girlfriend, but had the confidence as if they were getting laid every single night. The other cliques would obey the rules of this grid and surround the popular students. As for me, I would sit near the grid’s foul line: two tables away from everybody else.

The cafeteria at college was different. There was no grid. The seating areas were split into three different sections. There was no center. Looking around, I didn’t come across any designated tables for the popular kids. There were no loners off to the side. Everybody had somebody.

The next day was the first time I walked into the cafeteria. Students that sat together remained centered on their conversation, they didn’t turn to glare. I kept my hands pocketed when walking in. Once inside, I stood in between the different kitchens. In front of me was Mexican, to the left was Italian, behind me was the deli, and to the right was the salad bar. As I stood there, the line to each kitchen grew and so did my hunger.

At that moment, I didn’t know what to order or how to order. It was no different than ordering fast food or telling your mom what you want for dinner yet, it was the complete opposite. I could overhear students confidently ask for a sandwich or plate of pasta, and I felt overwhelmed. I wondered how weird it would be to bring a bagged lunch to college. I then remembered how sparse my kitchen was back at the apartment: half-empty box of cereal, 12-pack of water, and a rotisserie chicken. I had never liked eating alone or cooking for one.

“Hey stranger,” said a voice from behind me.

I turned around to find Stacey. This time her hair was down and she was wearing reading glass with black, square frames. She was holding a Sprite and bag of chips.

“You going to eat or what?” She opened her bag of chips.

“Yeah, I just don’t know what I want.” I looked over at the kitchen serving Italian food.

She handed me her soda and chips. “These are paid for. Go find a table.” She then got in line.

I didn’t want to argue with her in fear that I’d end up sitting alone, so I ventured out to the seating area. I placed Stacey’s chips and drink on the closest table to me: a booth next to a window. Sitting down, I noticed that still no one had acknowledged me. I enjoyed the privacy but at the same time, when you’re being judged, at least you’re being noticed.

A few minutes later, Stacy returned to the table with two personal pizzas. One was cheese and the other I did not recognize. She placed the cheese pizza in front of me. I leaned forward to retrieve my wallet from my back pocket.