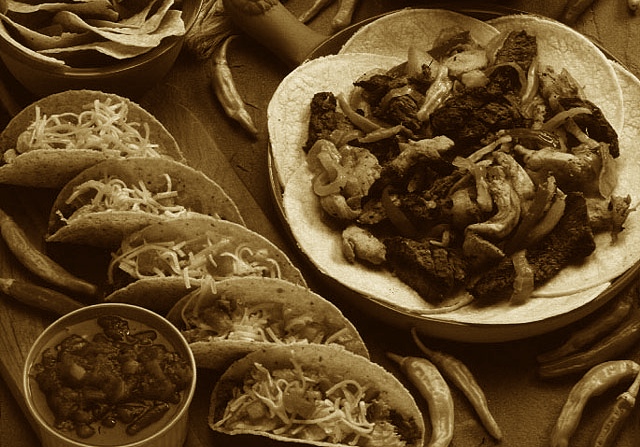 I’m going to be honest – last night, when I went out to dinner with my boyfriend, I embarrassed myself. Luckily, I shared this moment with my boyfriend only, and not with the waiter who could barely hold back a chuckle when I pronounced my order of “corn tortillas” as “torn cortillas.”

After my boyfriend and I ordered, I acknowledged a table for three sitting across from us. The party consisted of a husband, wife and their teenaged boy, who I’m guessing was around the age of 15. The three of them were sharing a large platter of nachos. Not just sharing, but devouring this meal. At one point, the son was not using his utensils and was just chewing on a large chunk of cheese that I confused for as a chip, because of its size and shape. Once the plate was empty, their waitress came by and took away their dishes/utensils. She then returned with a second set of utensils and napkins. In the back of my mind I thought, “Oh, they are going to order dessert.”

Ten minutes later, while my boyfriend and I were eating our dinner, the family was given their entrees: burritos! I thought to myself, “How can they eat anymore?” Not only does the thought of THAT much cheese sicken me because I am lactose-intolerant, but that “appetizer” was a TON of food. That app alone was probably almost 1,500 calories. Not only did they finish their appetizer, but they also finished their entrees. At one point, I turned to my boyfriend and whispered, “I feel like such an idiot, I thought those nachos was their entree!”

Look, I’m all for pigging out every once in a while. Last night I had four fajitas – each loaded with chicken, peppers, guacamole, rice and salsa. But honestly, I think that people are really in denial of how much they’re consuming. I rarely order appetizers when I go out, mostly because an average appetizer – like nachos – is loaded with as many calories as the meal you are most looking forward to: the entree!

Not only do most people order appetizers, but at some restaurants, they serve you bread with butter, or this case, chips and salsa. So before you eat your “meal” you have already eaten at least two “meals.”

It’s a scary thought that some people take for granted.